Licensed To Kill takes a riveting journey into the minds of men whose contempt for homosexuals led them to murder. Attacked in 1977 by gay bashers on the streets of San Francisco, filmmaker Arthur Dong confronts murderers of gay men face-to-face in his film. He asks them directly: “Why did you do it?”

Probing on-camera interviews with seven convicted killers behind bars propel the narrative drive of Licensed To Kill. These inmates include a wide range of distinct profiles: a young man who claims he justifiably killed as protection from his victim’s sexual advances–a defense known as “homosexual panic”; a self-loathing, religious gay man who killed because of his own homosexual tendencies; a victim of child abuse who feared losing his manhood; an army sergeant angry over the gays in the military debate; and a self-described homeboy looking for easy prey.

Licensed To Kill is an uncompromising investigation into the roots of anti-gay violence. As seen through the eyes of murderers, the film examines the social, political and cultural environments of these men and questions whether society had given them a “license to kill” homosexuals.

Licensed To Kill is a powerful fusion of elements from a number of sources: the interviews themselves; videotaped confessions of perpetrators; news reports; court room scenes; graphic evidence from police files; home and police videos of actual gay bashings and killings; and childhood photos of the murderers. These and other graphics are layered with on screen text which punctuate the hard facts of the killings. Adding to the original score is Me’Shell Ndegeocello’s searing hit song, Leviticus: Faggot, which catapults the film to an explosive conclusion. 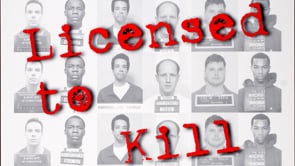